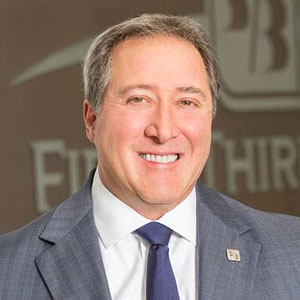 Greg D. Carmichael serves as chairman and chief executive officer of Fifth Third Bancorp, the ninth-largest U.S.-based consumer bank. Since Greg became CEO, the Company has grown in assets to over $200 billion* and is recognized as one of the most innovative banks in the country. It has approximately 21,000 employees and about 1,120 banking centers across 11 states. Its four main businesses are Commercial Banking, Branch Banking, Consumer Lending and Wealth & Asset Management. The Bank has commercial and consumer lending presence across the United States.

In 17 years of service to the Company, Greg has provided outstanding direction and vision, and his leadership has helped drive the Bank’s transformation and overall success. Greg joined Fifth Third Bank in June 2003 as executive vice president and chief information officer. He was named chief operating officer in 2006, then president in September 2012. He was appointed to the Board of Directors in July 2015, became CEO in November 2015 and was elected chairman of the Board in January 2018.

Greg and his wife live in Cincinnati. They have three adult sons.

Greg earned a bachelor’s degree in computer science from the University of Dayton and a master’s degree from Central Michigan University.

In January 2020, Greg joined the board of directors of Encompass Health. He also serves on the board of trustees of Bethesda Inc. and the board of directors of the American Bankers Association. He is vice president of the Ohio Business Roundtable and member of the executive committee for the Commercial Club of Cincinnati. Greg is a member of the Bank Policy Institute’s board and was recently appointed chair of the Business Innovation Technology Security Committee.

In March 2020, Greg was a founding member of the Restart Task Force, initiated by the Cincinnati USA Regional Chamber to bring together Greater Cincinnati CEOs to guide the business community’s response to the coronavirus pandemic.

In 2019, Greg was named to the American City Business Journals’ “Influencers: Finance” list of 100 U.S. executives with the biggest impact on business.

For over five years, the financial services industry has been engaged in digital transformation; physical banks and paper systems are ...
Read More
© 1993-2021 Scottsdale Institute | All rights reserved