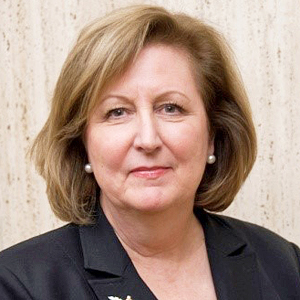 Patricia Castel Skarulis is the Senior Vice President and Chief Information Officer at Memorial Sloan Kettering Cancer Center where she oversees all computing and communications for the clinical and research enterprise.  Prior to joining Sloan Kettering, Pat served in a similar capacity as Vice President and CIO at Rush University Medical Center in Chicago where she was also an Assistant Professor in the Department of Health Systems Management.  Prior positions include: Vice President for Information Systems and Vice Chancellor at Duke University where she was also Professor of the Practice of Computer Science; Director, Administrative Systems at Princeton University; Assistant Director, Academic Computing at Rutgers University, and Associate Member of Technical Staff at Bell Laboratories.  She received her M.A. and B.A. in Mathematics from St.  John’s University in New York, and attended the Institute for Educational Management, an executive program for higher education at Harvard.

Pat is very active in the Healthcare community and was named the 2008 CHIME-HIMSS John E. Gall Jr. CIO of the Year. She is a charter member of CHIME, has served as its chair and she is an active member of HIMSS having spoken at many of its national conferences.  Additionally, Pat serves as a member of the Healthcare Sector Coordinating Council to advise the Departments of Homeland Security and Health and Human Services on matters relating to healthcare critical infrastructure. Pat is a member of HISEA, the Health Information Systems Executive Association and has served as its Chair.  She is a member of the American Association of Medical College’s Group on Information Resources serving on the GIR Board for three years.  In 2009, she was inducted into CIO Magazine’s CIO Hall of Fame.

She has held several leadership positions within the Society for Information Management (SIM) and has served on the Board of Directors for EDUCAUSE (a higher education technology consortium), the Triangle Universities Computation Center (TUCC), and the Research Triangle Institute in North Carolina.

She lives in Manhattan and serves on the Board of METRO, the Metropolitan New York Library Council. She is also a member of the Board of Trustees for St. John’s University in New York.