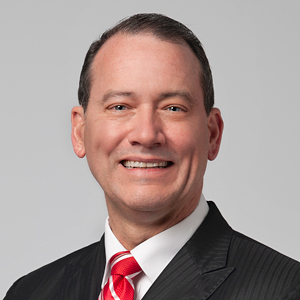 Scott Knoer, MS, PharmD, FASHP, is the 13th Executive Vice President and Chief Executive Officer of the American Pharmacists Association. He received his BA in psychology from Creighton University in 1988 and his PharmD from the University of Nebraska in 1996. He completed a 2-year administrative residency with a concurrent MS degree in hospital pharmacy from the University of Kansas in 1998.

Before his current leadership role at APhA, Dr. Knoer was the Chief Pharmacy Officer at the Cleveland Clinic from 2011 to 2020, where he led an international pharmacy enterprise with a $1.4 billion dollar drug budget and 1,558 FTEs in 18 hospitals with facilities in Ohio, Florida, and Nevada; Toronto; London; and Abu Dhabi.

After graduation from pharmacy school, he was an Operations Manager at the University of Texas Medical Branch at Galveston for 3 years. Moving to Minnesota, he was the Director of Pharmacy at the University of Minnesota Medical Center, Fairview, for a decade before being recruited to the Cleveland Clinic in 2011.

Dr. Knoer has served the profession extensively through involvement in professional organizations at the local, state, and national levels. He is published widely on a variety of pharmacy and leadership topics. He is a frequent invited lecturer to state, national, and international audiences. He is often quoted as a health care expert on a broad array of topics in newspaper, radio, and television outlets.