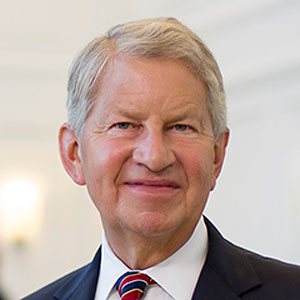 Hanson currently serves on the faculty of the University of Louisville as an educator and executive resource for the students. He is also involved in advising startup companies in the healthcare space, consulting and interim management, and writing blogs with particular focus on the developing “mega” health systems.

He has served as CEO of Baptist Health of Kentucky and Indiana, Senior Executive Vice President of Texas Health Resources in Dallas/Fort Worth, and CEO of Appalachian Regional Healthcare in Kentucky and West Virginia over the past nearly twenty years.

Prior to that Hanson served in CEO/COO/other C-suite roles in western New York, Chicago, Iowa and Indiana.

He chaired the American Hospital Association’s prestigious Council on Health Systems in 2012-13 and served on it for a number of years. He has also chaired the Metro Louisville United Way campaign (with his wife Joyce), the Louisville Health Enterprise Network and Greater Louisville Inc.

Hanson has a major focus on working positively with physicians , nurses and other caregivers to strive for the Quadruple Aim and has been involved in significant financial improvement in many of his positions.

Hanson received a Master of Public Health in health administration from the University of Oklahoma and a BS in urban and regional planing from Iowa State University. The Hansons have two daughters, a son and three grandchildren.