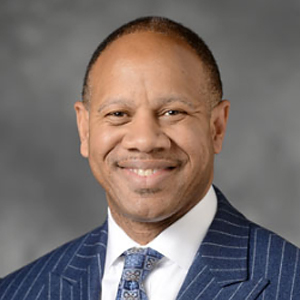 Wright L. Lassiter, III is the President and CEO of Henry Ford Health System, overseeing the $5.5 billion health system comprised of six hospitals, a health plan and a wide range of ambulatory and retail health services consisting of more than 60 clinical locations and 28,000 employees.

Lassiter joined Henry Ford in December 2014 as president. In his first year, he led the Board and senior management team through a comprehensive strategic planning effort to position Henry Ford for the future. In addition, he oversaw two successful mergers, one with Allegiance Health in Jackson, Michigan, and the other with HealthPlus of Michigan, a health plan based in Flint, expanding the geographic footprint of the System and
generating an additional $1 billion in revenue.

A seasoned health care executive, Lassiter has more than 25 years of experience working in large, complex health systems, including Methodist Health System in Dallas and JPS Health Network in Fort Worth, Texas. Prior to joining Henry Ford, Lassiter was CEO of Alameda Health System in Oakland, California, where he was credited with leading the expansion and turnaround of the $865 million public health system, achieving eight
years of positive financial performance, The Joint Commission Top Performer status, significant increases in patient engagement and reductions in patient harm.

Lassiter received his master’s degree in Healthcare Administration from Indiana University where he graduated number one in his class, and completed his bachelor’s degree with honors in Chemistry from LeMoyne College in Syracuse.

“I have one goal,” says Wright L. Lassiter, III: “Reduce the gap between today and what’s possible.” It’s a lifelong ...
Read More

Managing Health and Care Across the Continuum – bios